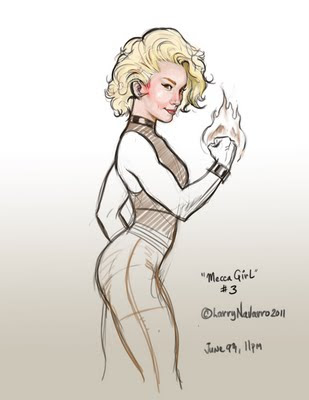 Okay, "Mecca Girls " is not my idea but an idea started by Christian Henesian who I drew in a previous post.
It's refering to girls how work out at the famous Gold's Gym in Venice ,California. So far I guess I've already drawn 3 of them . This is a quick one drawn at 11pm tonight. I can't say that it's an actual portrait or likeness because It doesn't really look like the person I think. More of an impression of the person's character.
Actually I've drawn a hand full of people that work out at Golds over the years. It's a great place for people watching. Much more intersting people to draw than hanging out at some diner or coffee shop. But I guess that depends on what part of town you hang out in .
Well at Gold's at least you also get to view some great physiques and not some flabby bellied trucker sitting down to have some pie and coffee at the local diner. And I know there are plenty of artist that just live to draw that type of crowd but it just isn't what I want to draw. As a matter of fact I was thinking about how I draw in my sketchbook as opposed other artists. Some sketch at a coffee shop while observing their model. I tend to observe my model , then go home and try to draw them from memory. People tend to move too much any way.
plus I don't get bogged down by what the person actually looks like or what they're doing.
-lar
Posted by Larry Navarro at 11:40 PM