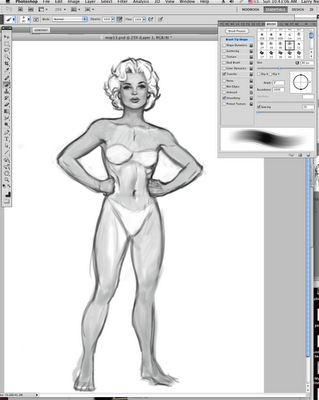 This is just a type of figure that's been floating in my head recently. Sort of reminiscent of the sixties but with some current look to it as well. Or maybe not and I'm just stuck in the past. "Painting " in black and white tones in Photoshop just feels very natural to me . I like that it is so immediate. I don't have to find the right paper. I do not have to sharpen pencils or knead erasers. I know it feels like cheating and that I should be using classical tools but at one time those classical tools were the cutting edge of technology! Who invented the rubber eraser? Before that artists used to have to use a squished up piece of white bread.
The reason for me to do these drawings is because I spend so much time drawing for other people that I have to draw for myself. Sometimes it's easier to work for other people. They know what they want ( Sort of) they're generally happy with what they get and there's a definate deadline so I can't play around with it forever.
This is just a figure. I like drawing figures and I like drawing them from imagination because I have to work it out in my head and it feels more like creating than copying. Some people like to do crossword puzzles and jigsaw puzzles . I like to draw.
I was looking at some old posters for "Casino Royal" from 1967 and I liked the illustrations . They were nicely painted. Some of the anantomy was off and the likenesses were not that good but hey looked complete and part of a set. Also they didn't look over worked. Something that's easy to do when you're working to make something look good. you have to know when to stop.
I'll play around with this a little more.
-Lar
Posted by Larry Navarro at 10:48 AM